Mixed Messages: How And When To Never Send Them

Avoiding clarity is one way to streamline non-productivity.

So many leaders send mixed messages every single day and don’t even realize it.
Communication is key, and it’s your job as a leader to unlock clarity.

After you leave the conference room, you don’t want your employees looking over at one another in confusion, saying “What the hell did he just say?”

Confusion is always avoidable. Sometimes we just try to avoid it in the wrong way. Click To Tweet

So if you learn to contextualize each situation based on the listener, and if you can appropriately adjust your gestures, facial expressions, tone of voice, vocabulary, and intent, you’ll realize how much time is saved and how much productivity is increased.

An example of when I found myself questioning a mixed message from a superior:

After high school, I was recruited to play basketball at Simon Fraser University.
At the age of seventeen, I packed up everything and moved away to start a new life in a big city with even bigger personalities. I was very nervous.


My goal was to make the varsity basketball team.

There were twelve spots on the team. But the anxiety sunk in as I realized that ten spots were already taken by those who made the team last year. Shit.

I was placed on the Junior Varsity Team. And that was the start of my basketball career.

Once all the teams were picked, our athletic director gathered everyone into the auditorium for a preseason speech to kick-off the year in high hopes.

I sat next to a fourth-year player on the Varsity Team.

The athletic director walked on stage and said, “Always remember, here at Simon Fraser, academics come first.” As he said this, he held up two fingers.
Then he said, “…and athletics comes second.” Then he held up one finger.

The veteran player heard me and said, “You missed the point.”

I realized later that the athletic director was saying that athletics came first and that academics came second. But it took further explanation to understand exactly what he was saying.

He was the athletic director. We all realized his top priority is athletics. So why didn’t he just say it?

What Mixed Messages Are You Sending?

Situations Where Miscommunication is Most Prevalent:

You might have thought you’ve found the perfect word or phrase to emphasize your point, but guess what. According to Dr. Albert Mehrabian, the author of “Silent Messages,“ only a small portion of communication is established by actual words.

55% of communication is non-verbal:

38% of communication is about your voice inflection:

7% of communication is based on the words themselves:

So based on this data, if a text or email contains an emotional slant, and if there hasn’t been context established, there’s a 93% chance that your message will get misinterpreted.

Pretty crazy, right? It almost seems unbelievable. However, if you do this exercise with your team, you’ll immediately understand why these numbers are so staggeringly different from what you’d expect.

2. “I didn’t say you had an attitude problem.”
Alright. Who has one then?

3. “I didn’t say you had an attitude problem.”
Wait, are you saying I just developed one out of nowhere?

4. “I didn’t say you had an attitude problem.”
Well, what kind of problem do I have?

5. “I didn’t say you had an attitude problem.”
Wait, so you’re saying that it could be better, but that it’s not a real problem yet?

Once you’ve conquered communication through emphasis, it’s time to master your accompanying gestures and physical approach.

Be Very Very Intentional With Your Physical Communication

In a leadership role, communication is absolutely crucial.

If there’s potential ambiguity or even the slightest emotional tone, everything you say can be easily misconstrued.

But if you’re open to a little bit of scrutiny and a few justified suggestions, you’ll notice a huge difference in the way your team understands you, and it will put them in a MUCH better position to implement your ideas.

If you need help establishing clarity or speaking in a way that promotes communication, let’s talk. 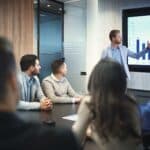 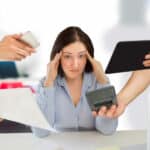 Distractions Work, Just Not At Work: Here’s How Leaders Can Eliminate Themexecutive coaching